A novel animal model for characterization and treatment of melanoma metastasis

Brain metastasis is a complication occurring in one third of all cancer patients. The annual incidence in the US is 170 000. Brain metastases is the commonest intracranial cancer, appearing 10 times more often than primary brain tumors (1). The most common sources of metastatic brain lesions involve the lung (50-60%), breast (15-20%), skin (5-10%) and gastrointestinal tract (4-6%).

Patients with melanoma metastatic spread to the central nervous system (CNS) have poor prognosis (2, 3). Treatment strategies available today are ineffective, with low response rates, as current chemotherapeutic agents are ineffective. Clearly there is a need for suitable animal models in which spontaneous CNS metastases develop when cancer cells metastasize from the primary lesion in a manner that reflects the patient setting. We have currently developed such models, which will enable us to study the biology and the treatment of melanoma brain metastases.

We have recently developed a novel model system where tumor cells from human melanoma brain metastases are injected systemically in immunodeficient mice and metastasize to the mouse brain (4). This animal model recapitulates most steps of the metastatic cascade, and a better understanding of the molecular mechanisms behind tumor metastasis may thus be obtained. 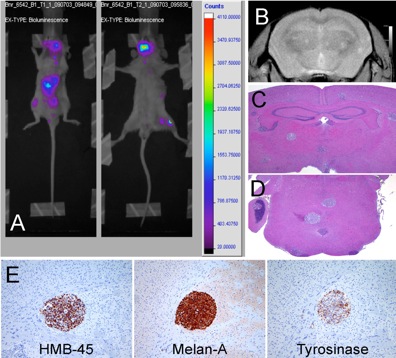 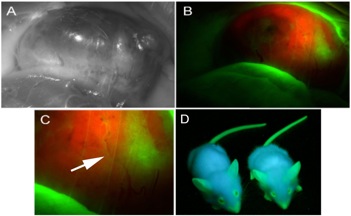 Figure 2. Tumorigenicity of the H1_dsRed cell line. A) 3 weeks after injection of the H1_dsRed cell line subcutaneously in matrigel, large tumors were observed. B) By fluorescence microscopy, the tumor cells (red) could be distinguished from the host cells (green), using an eGFP nod/SCID mouse strain. C) A larger magnification of the tumor area showed that dsRed negative blood vessels from the host extended into the tumor tissue (arrow). D) The eGFP mouse strain developed by Prof. Rolf Bjerkvig.

An important question is whether melanoma cells excised from brain metastases in patients would metastasize selectively to the brain in a mouse model system, if the tumor cells are injected into the bloodstream.

In order to study this we developed several tumor cell lines from a brain metastases harvested from a patient with malignant melanoma (Figure 1A). To verify the tumorigenicity of the cell line, melanoma cells were injected directly into the brains of immunodeficient nod/SCID mice. During a time period of 3-4 weeks, large lesions developed (Figure 1B).

We then generated new cell lines, by labeling the tumor cells with suitable reporter genes. First, we inserted the DsRed reporter gene into the H1 cell line, using a lentiviral vector, resulting in the H1_dsRed cell line. This cell line was embedded in matrigel, and injected subcutaneously into eGFP nod/SCID mice (5). After around 4 weeks, large tumors developed subcutaneously (Figure 2).

Systemic in vivo tumor development can also be detected by bioluminescence imaging of the animals. Thus we used a retroviral GFP/Luciferase construct, and obtained a 100% GFP/Luciferase positive cell line after FACS sorting. These cells were injected into the left ventricle of the heart in nod/SCID mice, and tumor development was studied by bioluminescence imaging. After 3-8 weeks, the animals developed new tumors in most organs of the mouse body (Figure 3A). T1w/T2w MRI showed multiple metastases within the CNS (Figure 3B). Around 30 micrometastases (sizes 0.1-0.8mm) were detected in the animal brain by histology (Figure 3C, 3D). The melanocytic properties of the tumors were confirmed by immunohistochemistry (Figure 3E).

We have already injected the H1_GFP_Luc metastatic melanoma cell line into several mice, and collected tumors from lung, bone, CNS and ovary. These tumors have been plated, and new cell lines have been established (Figure 4). We are currently reinjecting these new cell lines into mice, to see if the tumor cells home specifically to the organ they were established from.

The H1_GFP_Luc tumor cells are also being injected into the blood stream of immunodeficient mice, and the colonization and growth of new tumors are being detected using advanced preclinical MR imaging. It has previously been shown that breast cancer cells prelabelled with micron-sized iron oxide particles (MPIOs) and therafter injected intra-cardially into mice, can be tracked by MRI as single cells in the mouse brain (6). In a similar manner, we are labeling the H1_GFP_Luc melanoma cell line with Fedex (7), and performing T2 and T2* weighted MR imaging.

Brain metastases are very often highly vascularized, a process driven primarily by VEGF. In this part of the project, we are specifically targeting the neovascularization process using bevacizumab treatment. Bevacizumab, which is a VEGF antibody, has previously been used in advanced, primary cancers (8-10). Just recently, the antibody has also been FDA approved for use on patients with brain metastasis. However, there is limited knowledge on treatment effects and biological responses after bevacizumab treatment on metastatic brain tumors. Our metastatic brain tumor modell develops highly angiogenic tumors, and thus mimic the vascular, metastatic brain tumors seen in patients. After injecting the H1_GFP_Luc cell line in the left ventricle of the mice, we are treating the animals with clinically relevant bevacizumab doses, injected intraperitoneally once a week for 3 weeks. The animals are then be studied with MR imaging.