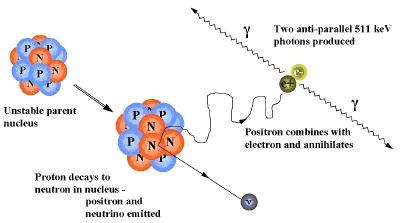 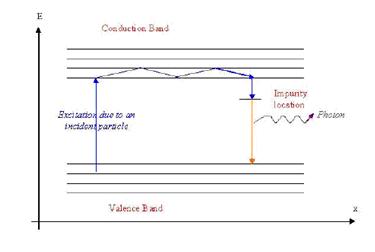 Electronic transition in a crystal

An APD is basically a p-n junction diode operated at large reverse bias voltage. The physical mechanism which avalanche gain depends, is the impact ionization. It occurs when the electric field in the depletion region is strong enough: an electron colliding with a bound valence electron transfers enough energy to this electron to ionize it. The additional carriers can gain sufficient energy from the electric field to cause further impact ionization, creating an avalanche of carriers.

With a higher electric field, a situation is created, in which one avalanche trigger itself a second avalanche at a different position.

The difference between both modes relies on the holes: in Geiger mode, they trigger avalanches, whereas in proportional mode they have not enough energy to do so. From the critical value of the electric field (corresponding to the breakdown voltage), a self propagating chain reaction occurs. In principle, an exponentially growing number of avalanches could be created.

The avalanche photodiode (i. e. pixel for the silicon photomultiplier) is connected to the power supply through a large series resistor Rs. If the current through the diode tends to zero, the voltage across the diode equals Vbias, which will be larger than the breakdown voltage. So, when the diode breaks down, the series resistor reduces the voltage across the APD, what quenches the avalanche. After the breakdown is quenched, the diode is recharged through the resistor. The APD is now ready to receive another photon.

The MAPDs are 3 mm *3 mm, composed of 104 pixels /mm2 (9.104 pixels in total). They should be operated in inverse direction: anode should be grounded, while positive voltage in range 132-136V (it depends on the MAPDs and it is reported by the manufacturer). Exceeding the voltage 137V leads to unstable operation and even to the destruction of MAPD.

The resistance of each pixel allows the passive quenching. Pixels are electrically decoupled from each other by polysilicon resistors and are connected by common Al strips, in order to readout the MAPD signal. Each MAPD pixel operates as a binary device but MAPD in whole is an analogue detector. The output signal allows us to determine the number of fired pixels: in fact, the output signal is proportional to the number of fired pixels. The MAPD is intrinsically very fast due to the very small width of the depletion region and the extremely short Geiger type discharge. We must keep in mind that the name of the device depends on the manufacturer. MPPC (for Multi-Pixel Photon Counter) and SiPM (Silicon PhotoMultiplier) are two other usual names.

Properties of the devices